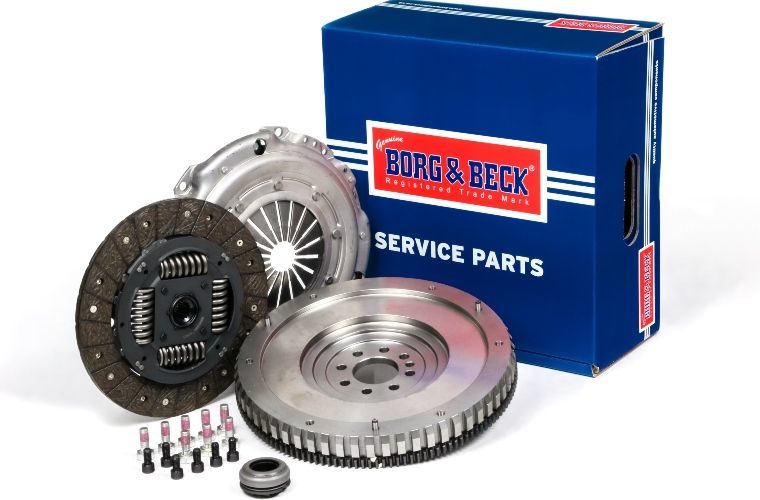 Borg & Beck continues to invest and update its quality control and test equipment in its bespoke technical centre, enabling it to supply products in which technicians can truly rely.

As a result of the company’s investment in its facilities and engineers, the First Line brand has the knowledge and ability to take its clutch specialism to a new level as it has, for example, adapted the driven plate equipment to be able to test dual-mass flywheels (DMF) up to 260mm.

Borg & Beck says this enables it to guarantee that its single-mass flywheels (SMF) can match the DMF specification as closely as possible.

Without question, the development of the dual mass flywheel (DMF) clutch has been a technological triumph and resulted in increased driver comfort and refinement.

However, Borg & Beck says it also has its drawbacks, as it can be prone to problems related to the build-up of heat within the unit, as well as manufacturing costs being significantly higher compared to a standard clutch kit.

A Borg & Beck spokesperson said: “The complex DMF design makes it very difficult for the heat that is naturally produced during the normal operation of the vehicle to be dissipated through the two masses of the flywheel.

“These DMF issues are more of a problem for vehicles that cover high mileage, are driven at low speeds in the city or endure the demanding operating environment commonplace with taxis and LCV applications.”

When replacing the clutch in these applications, the best solution is a single mass flywheel (SMF) kit according to Borg & Beck.

The spokesperson added: “The SMF kit is an original equipment (OE) designed product that allows the worn DMF and its associated clutch components to be replaced with a traditional solid flywheel and clutch kit.

“This has been made possible by the development of the long travel damper, which uses advanced vibration clutch damper technology to create a damper capable of 40 degree of torsional movement, which is comparable with the movement that was typical of the equivalent DMF at the time of the vehicle’s original manufacture.

“Technically, the SMF will reduce engine vibrations due to the increased inertia of the solid flywheel.”

In addition, the brand claims that SMFs are extremely durable, due to efficient heat dissipation qualities and the lack of complex high wearing flywheel components.

“The SMF is less expensive to manufacture and has the added advantage that the cost of a subsequent replacement is reduced further by the fact that the flywheel does not need to be changed with the rest of the clutch components,” explained the spokesperson.

“As well as the cost advantages, the heat issues inherent with the DMF system are nullified when the solid flywheel replacement is fitted.

“This is because the traditional design of the system allows the heat to be absorbed through the flywheel and dissipated through the engine and flywheel housing in the normal way.

“Therefore, the SMF offers a particularly suitable solution for vehicles where the original DMF is unable to dissipate heat effectively, but in addition, it offers greater longevity over DMF technology and is much more cost effective to replace.”

Borg & Beck supply a spline grease sachet with every kit, as well as new flywheel bolts to allow workshops to benefit from the most straightforward fitting procedure.

The Borg & Beck Clutch programme includes 2 in 1, 3 in 1, 3 in 1 CSC, and SMF kits, as well as concentric slave cylinders and hydraulic components which cover modern and classic applications, making it the preferred choice for factors and technicians.