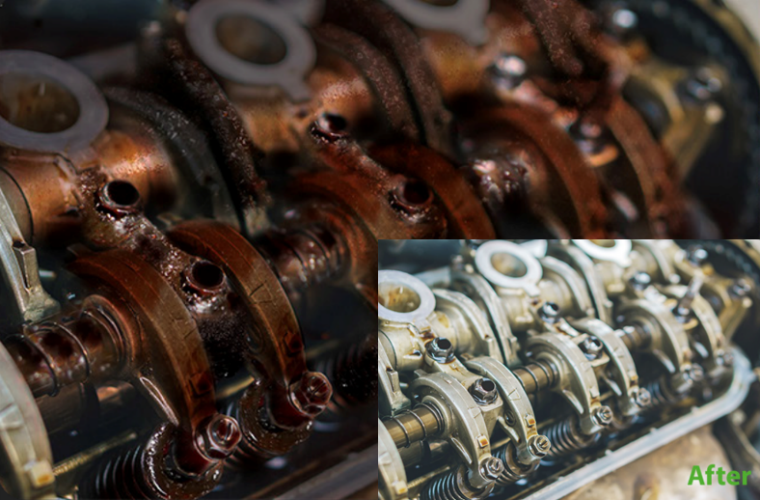 Before and after treatment of Tunap's 157 interior engine cleaner.

A Tunap spokesperson said: “To prolong the life of the engine the contaminated oil should be fully removed at regular service intervals.

“Modern engines reduce emissions by taking the crank case gases produced by heated components within the engine and recirculate the gases via the exhaust gas recirculation system and exhaust, the gasses pass components such as the EGR Valve, catalytic converter and, in diesels, the diesel particulate filter.

“When you change the engine oil it is impossible to remove all of the old contaminated oil by just allowing the oil to drain out the oil sump, up to +/- 15 per cent of the old oil can remain in the engine.

“The old oil with contaminates clings to the components inside the engine.

“This can result in the remnants of the black and contaminated old oil remaining following the oil change.

“These contaminants can cause piston rings not to work as efficiently allowing the contaminants to circulate past the rings and into the combustion chamber and therefore into the crank case gases.

“When pressure builds in the crank case gasses are released into the air intake, these gases then travel around the engine and exhaust components which then have a detrimental effect on thing such as; EGR valves, EGR coolers, intake valves, injectors, turbo chargers, catalytic convertors and diesel particulate filters.

“This results in increased contamination and a reduction of engine efficiency and performance and will eventually lead to a mechanical failure of the components.”

Tunap warn motorists that problems can occur if engine oil is overused.

Vehicle service schedules ensure that the oil is changed before maximum absorption levels are exceeded.

If these levels are exceeded contaminates start to build up in the engine with what is commonly known as sludge.

Moisture and temperature can also contribute to the build-up of sludge which can lead to more serious issues such as oil starvation by blocking the oil strainer.

The TUNAP 157 is the only non-solvent based product that’s manufacturer-approved in the UK and is safe to use on all engines, including those with a wet cam system.

For further information, head to the TUNAP website be clicking ‘more details’ below.