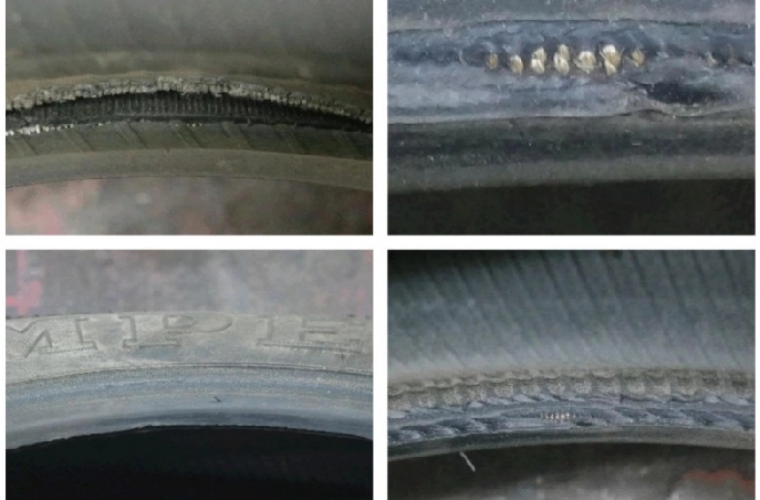 Tyres seized from the garage.

The owner of a garage in Yorkshire who ignored safety advice from trading standards officers and was found to be selling old, part-worn tyres that could have caused “catastrophic failure” if used on a car has been ordered to pay over £6,600 by magistrates.

Marek Lukaszczyk, owner of Mark’s Garage in Bridlington, was charged with two counts of being in possession for supply of a tyre that was unsafe under the Motor Vehicle Tyres (Safety) Regulations 1994 as the external cord was exposed.

Lukaszczyk failed to appear at Beverley Magistrates Court last Wednesday, and the case was proved in his absence.

It comes just a week after the Local Government Association (LGA), which represents councils in England and Wales, warned of a crackdown on dodgy retailers that sell dangerous part-worn tyres.

Trading standards officers from East Riding of Yorkshire Council his garage business in October as part of a Yorkshire and Humber-wide survey into premises selling part-worn tyres.

The court heard how during the visit, officers seized two tyres from the defendant’s stock of part-worn tyres that were available to buy by members of the public as they were showing evidence of being unsafe.

The tyres seized were 28 and 10-years-old with signs of age-related deterioration – both were deemed unsafe for further service.

Lukaszczyk had previously laid the blame with a former employee who had failed to complete the necessary checks.

The owner was given a warning in 2014 by trading standards officers for a similar issue and, despite the efforts of the officers to help, the defendant continually ignored advice.

Cllr Mike Stathers, portfolio holder for enhancing communities at East Riding of Yorkshire Council: said: “It is clear from the severity of the fine for these offences that magistrates took this very seriously.

“The defendant was selling part-worn tyres which, if used, could have put people’s lives at risk.

“This case serves as a warning to those dealing in part-worn tyres that trading standards officers will continue to ensure the safety of the public by carrying out checks to ensure they meet safety standards.

“Consumers may feel they are getting a bargain by buying second-hand tyres or some consumers may not have any other choice, but irrespective of that they have the right to demand the products they buy are safe and legal.”

According to the latest government figures, 17 people were killed and 719 injured in reported accidents in the UK in 2017 in which illegal, defective or underinflated tyres were a contributing factor.