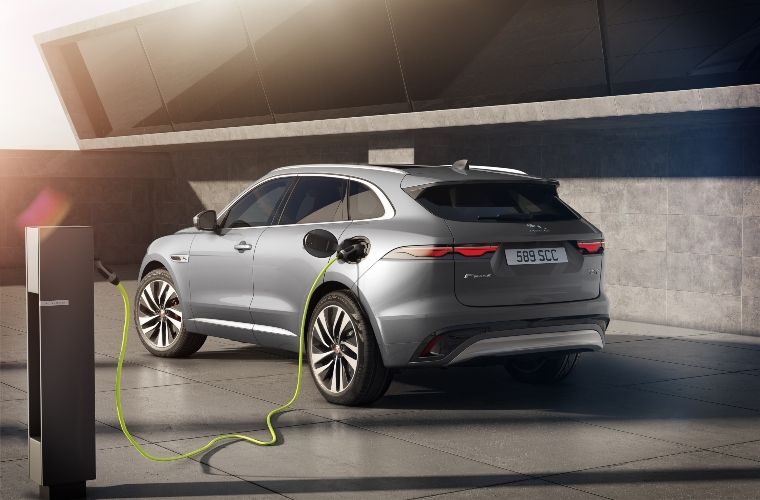 The new F-PACE is available with the P400e PHEV powertrain as well as the latest four-cylinder and new in-line six-cylinder petrol and diesel Ingenium engines.

The new 2.0-litre four-cylinder PHEV model produces a combined 404PS and 640Nm from its petrol engine and 105kW electric motor.

The advanced electric motor is powered by a 17.1kWh lithium-ion battery and helps contribute to CO2 emissions from 49g/km and fuel economy of up to 130.2mpg as well as impressive performance figures of 0-60mph in 5.0 seconds.

When fully charged, the new P400e is capable of up to 33 miles of all-electric driving, enabling the new F-PACE PHEV to complete the average UK daily commute, of 18.8 miles to and from work, in EV mode without requiring a recharge.

Fast Charging (32kW DC) is capable of delivering 0-80 per cent charge in 30 minutes while a domestic 7kW wall box can provide a charge of 0-80 per cent in as little as one hour 40 minutes.

This energy is then stored in a separate 48V lithium-ion battery before being intelligently redeployed to assist the engine when accelerating away, as well as delivering a more refined stop/start system.

With MHEV technology, the next-generation 163PS 2.0-litre four-cylinder Ingenium diesel engine achieves CO2 emissions from 163g/km and fuel economy of up to 45.4mpg.

The in-line six-cylinder 300PS diesel engine delivers strong performance from low speeds while returning fuel economy of up to 38.1mpg and CO2 emissions from as low as 194g/km.

As well as the competitive efficiency, performance is just as impressive with 0-60mph covered in just 6.1 seconds.

The new diesel engine meets stringent emissions targets, including Euro 6d-Final, thanks to a raft of advanced technologies – series sequential turbos and an advanced after-treatment system make it one of the leading diesels in the world.

An electric supercharger supported by a twin scroll turbocharger and continuous variable valve lift (CVVL) deliver a strong combination of refined performance and efficiency and is capable of 0-60mph in just 5.1 seconds.

All engines are paired with Jaguar’s eight-speed automatic gearbox, which can be controlled using the steering wheel shift paddles for added driver engagement.

“Our next generation PHEV system delivers great fuel efficiency and low running costs, while the all-electric range of up to 33 miles is enough to cover the daily commute for most customers.

“The extensive powertrain choice includes our latest Ingenium petrol and diesel engines which feature advanced technologies and provide the perfect blend of performance, refinement and efficiency.”

All-wheel drive is standard across all F-PACE models and ‘intelligent driveline dynamics’ provides rear-wheel drive biased performance, with the ability to vary torque to individual axles almost instantly depending on conditions.

The new F-PACE chassis has been updated to support the introduction of the new electrified engines as well as enabling the latest ‘JaguarDrive Control’ and new ‘auto vehicle hold’.

The latest JaguarDrive Control features comfort, eco, rain-ice-snow and dynamic modes, which can be chosen manually by the driver based on the road conditions.

The new Jaguar F-PACE is priced from £40,860 OTR in the UK and is now available to order.