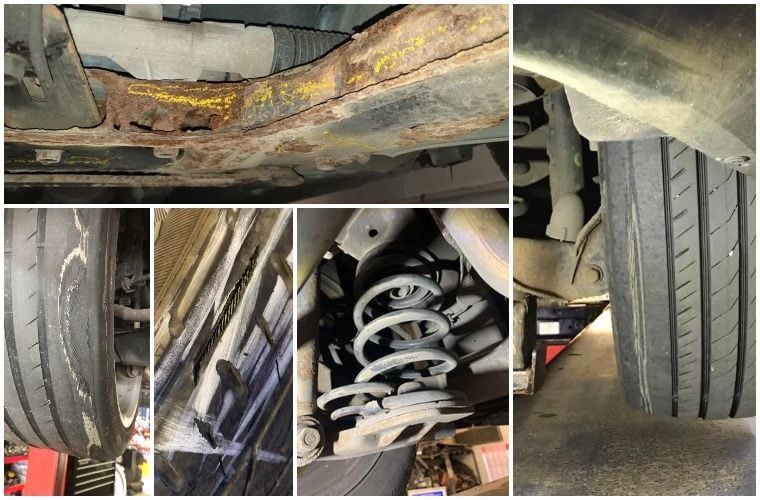 Pictures submitted by GW readers of faults found on cars eligible for the six-month MOT exemption.

The government is consulting on plans to end the six-month MOT extension, according to the Independent Automotive Aftermarket Federation (IAAF).

The government intends to draft an amendment to the Motor Vehicles (Tests) (Amendment) (Coronavirus) Regulations 2020, the IAAF has said.

The reported change would bring forward the end date of the six-month MOT exemption, which is currently set to expire on 29 March 2021, and reintroduce mandatory MOT testing from the amended end date.

An official government announcement will be made “as soon as possible”, according to the IAAF.

2. To return to mandatory MOT testing in four to six weeks from date of announcement;

3. To return to mandatory MOT testing in six to eight weeks from date of announcement.

Related: MOTs for lorries, buses and trailers to return in July

At the end of May over 65 per cent of normal test volumes were undertaken, with over 80 per cent of test stations routinely testing according to latest DVSA figures.

With road traffic levels on the rise inline with lockdown easing, amplified by government advice to avoid public transport where possible, the IAAF warns that “the longer these regulations are in effect the greater the risks are to road safety”.

In a statement released this week, the IAAF said: “The IAAF is very pleased to report that following a period of intense lobbying, the government has launched a consultation to restart MOT testing of light vehicles as part of the ongoing cross-government response to COVID-19 and the lifting of the related restrictions.”

“The intention is to balance returning to mandatory testing with providing sufficient notice to members of the public that these regulations will be ending and they will require a test and also to ensure that garages are provided enough time to adapt to demands in testing capacity and to have equipment calibrated.”

The IAAF has asked its members to submit view on the consultation.

FacebookTwitterMail
Previous ArticleWatch: Andy Savva draws parallels between a ‘full English’ and a ‘full service’Next ArticleCommercial Defender 90 and 110 to be launched later this year