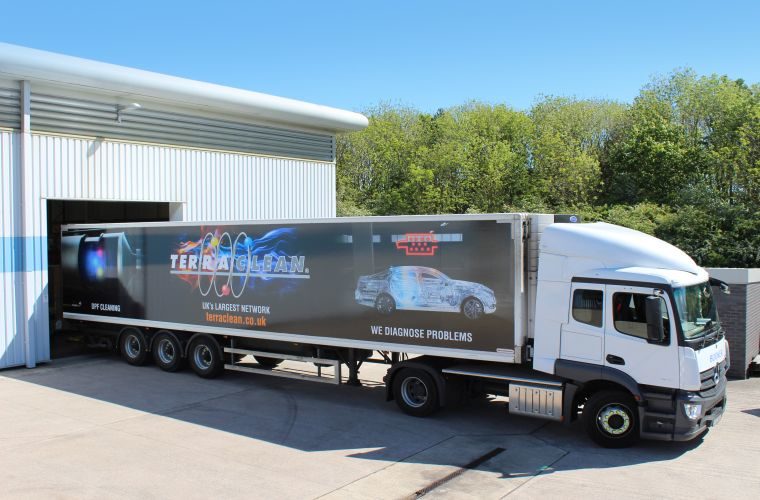 One of the TerraClean fleet vehicles.

​One of the new trucks from the TerraClean branded fleet was recently unveiled at Randstad’s head office in Cramlington, Northumberland and is part of TerraClean’s long-term strategy to deliver the benefits of its engine decarbonising and DPF cleaning brand to a wider consumer audience.

The HGVs feature TerraClean branding to create a significant visual impact for motorists, with striking graphics illustrating its engine and DPF cleaning benefits, alongside the website address for consumers to discover just how effective the brand really is for their vehicle engines.

What’s more, the fleet is part of a national supermarket chain and fuel stations with trucks strategically placed at hubs to ensure the brand is viewed nationwide.

This is just the latest development in TerraClean’s ongoing marketing activity, a key driver of business into TerraClean workshops, which also includes regular events planned throughout the year.

Randstad also recently hosted a unique one-off event for motorists, giving their engines a free deep clean, while highlighting the pitfalls of a clogged DPF.

Following the TerraClean service, a survey that was carried out by an independent company in which motorists provided feedback, revealed that over 95% noticed a difference in the performance of their car in the test drive, with 80% of them reporting their engine to be quieter.

The brand also maintains a strong social media and online presence, recently launching a new YouTube video to raise awareness of the potential risks associated with having a blocked DPF.

Its ongoing national media advertising has been at the core of their marketing strategy; in recent years, television campaigns launched across a number of digital and satellite channels has reflected the brand’s commitment to reaching the mass market on a national scale.

Furthermore, TerraClean is actively involved in supporting motorsport as a fervent fan of the sport, with its sponsorship of triple British Touring Car Championship (BTCC) champion Colin Turkington and PP Motorsport in the UK Clio Cup, both for the fourth year running.

Martin Dowd, Randstad managing director, said: “This is a fantastic and unique opportunity for us to put the marketing right where it needs to be, in front of the motorist.

“It is an extremely effective way to give the TerraClean brand maximum visibility on a daily basis, while demonstrating our commitment to our dealers in driving further business to their service centres and spreading the benefits of the service to more consumers.”

To find out more about TerraClean, select the ‘more details’ link.