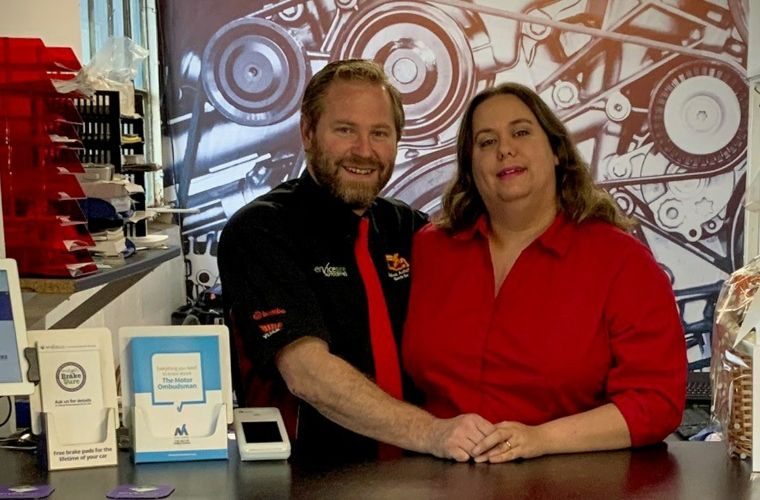 St Austell-based Dukes Autotech, joins an increasing number of independent garages seeking to cater to the needs of a niche that’s looking increasingly likely to soon become a norm.

Within the last few weeks Jaguar Land Rover has confirmed that its Jaguar brand will be go ‘all-electric’ by 2025, Ford made its pledge to go ‘electric-only’ by 2030 and Volvo, which is already on its way to achieving a 50:50 split between electric and hybrid sales by 2025, has now also committed to becoming a fully electric car company by 2030.

It’s a trend that husband and wife duo, Gavin and Kerry Dukes of Dukes Autotech is seeing locally too.

Kerry said: “You can see that the percentage of EV sales is shooting up and dealerships in St Austell are really pushing to grow EV sales.

“Many of our fleet contracts are making the switch too, even with vans, and there’s a couple of local taxi firms that are now 100 per cent electric.

“It all seems to be happening much quicker than I think our industry was prepared for – it seems to have caught us out a little bit.

“There’s not many independents around here that can cater to the needs of EVs, so it’s a good business move from that perspective.”

Dukes Autotech is no stranger to business development.

Gavin had long dreamed of owning a business and started the journey with a van, working as a mobile technician built up an invaluable reputation for his specialist auto electrician skills.

Kerry said: “He started to tap into local garages because he had a skill that some just didn’t have and he could fix problem cars that nobody else wanted to do.

“Things got that busy that I joined him in 2013 to help deal with the paperwork and answer the phone while he was out on the road.”

It was a short time later that the couple made the decision to establish premises, taking on a blank-canvas building.

Kerry explained: “It was a daunting prospect but we did a lot of viewings and consultations with companies with regards to equipment and we just got stuck in and designed the layout of the workshop ourselves.

“The night before we opened, I launched our new website, which was a bit of a mistake because the following morning we had 14 cars waiting outside for us but our ramps were yet to be installed.

“So that was an interesting day – I was busy moving everything in while my husband was working on the cars.

“We worked 16-hour days, seven days a week for about eight months but we got it done and have been gradually improving as we’ve gone along.”

Dukes Autotech attracted a unanimous vote by judges and was named overall winner of the 2020 Motor Ombudsman Garage Star Awards, in which customers nominate individuals, teams and garages that have gone ‘above and beyond’ to assist them.

The Motor Ombudsman received more than 800 nominations from across the country, from which 24 finalists were selected and presented before the panel of judges.

Kerry said: “Customer service is very important to us, it’s just a normal part of our day-to-day running of the business.

“To be told that actually what we’re doing is actually exceptional, is really quite humbling.

“We were overjoyed to be nominated, let alone win.

“It has reassured us that our approach works and has given the entire team an enormous moral boost during what has been a very difficult time for everyone.

“We’re lucky that our staff are very proud of where they work.”

Like other independents, the coronavirus pandemic served an enormous impact on business.

As the country went into its first lockdown, Kerry was told to shield.

A member of staff who had recently suffered a stroke moved into the Dukes household under Kerry’s care and the difficult decision to close business was made.

“It was such an unknown scary time,” Kerry reflects. “Closing was the safest thing to do for everyone at that time.”

During its 12-week closure, Gavin and Kerry took the opportunity to build a customer reception area, a luxury that’s now an essential in the battle to reduce the spread of COVID-19.

Kerry said: “It involved knocking down some walls, which was fun.

“We also invested in some new equipment and so far we seem to be doing pretty good.

“The way we conducted business before the pandemic meant that we didn’t have to take out a loan – we were very lucky.

“It also gave us an opportunity to take stock of what was important to us; family, friendship, all the people that matter.

“We’ve looked at staff hours, asking if we really need staff to finish at 6.00, and perhaps letting them leave at 5.30 so they can put the kids to bed.”

For now, it’s business as usual at Dukes Autotech and the couple are very much look-forward to welcoming their first EV customers following the completion of their dedicated bay.