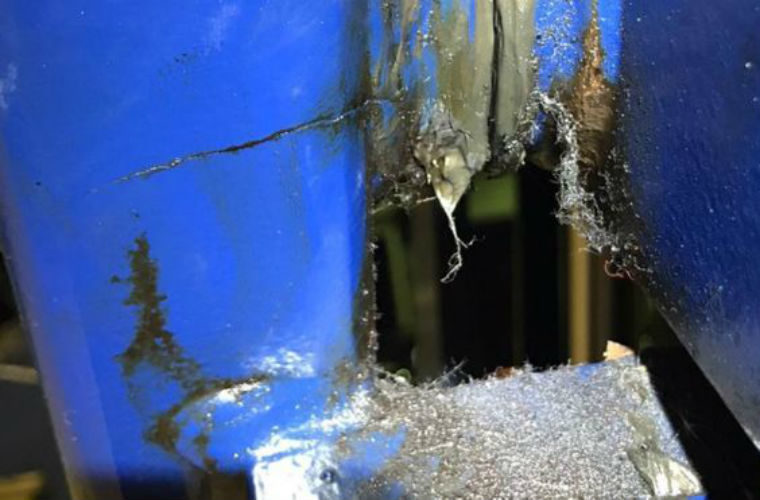 A crack in one of the affected lifts in Northern Ireland.

Lift failures at Northern Ireland’s MOT centres that led to the cancellation of thousands of tests last year cost £3.9m, a report has found.

Stormont’s Public Accounts Committee found the Driver and Vehicle Agency (DVA) had not correctly projected the lifespan of the lifts.

The DVA should have been more rigorous with a lift replacement plan, it said.

Committee chairman William Humphrey said: “We find it ironic that an organisation in the business of testing the road-worthiness of vehicles was not able to ensure that its own equipment was being properly maintained.”

The recently published report examined the suspension of vehicle testing services due to safety issues.

It followed two reviews commissioned by the minister for infrastructure that were carried out by independent engineers and the Northern Ireland Civil Service’s Internal Audit and Fraud Investigation Services.

Mr Humphrey said it was not the first time that problems had arisen within the DVA, with “long MOT waiting times” during 2019.

He pointed out that the loss of equipment meant the DVA lost about £2.95m worth of income in the 2019-20 year.

He added: “At the same time, DVA incurred costs of £980,000, primarily due to compensation for cancelled tests and then was required to spend £1.8m to replace 52 out of 55 scissor lifts.

An external review suggested an inadequate inspection regime and metal fatigue led to the situation with the scissor lifts.

The report also found that the DVA was “overly reliant” on a contractor and its maintenance schedule, and relied “too heavily” on a positive equipment survey in 2018, even though the scissor lifts were carrying out significantly more procedures than originally designed.

Mr Humphrey said: “We are keen to see DVA’s improvements through quarterly progress reports and look forward to the agency providing the service that people in Northern Ireland deserve.

The committee recommends that an estimated life-span of crucial equipment must be determined and a phased replacement programme put in place for all equipment to minimise disruption.

It also calls on the DVA to strengthen its oversight of the contract with Maha, particularly regarding the maintenance regime, and that future relationships with new suppliers are underpinned by contracts that include strong performance and penalty clauses.